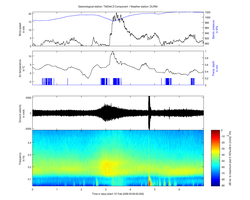 The continuous (back)ground motion of the Earth’s surface, often called seismic noise covers all observable frequency bands. The noise sources involve a wide range of natural and anthropogenic processes which overlap and show distinct time and spatial variations at different scales. Our aim is to contribute to the understanding of noise generation at about 0.01-40 Hz due to meteorological influence with a focus on the higher frequency range. Wind and storms are major noise sources of local and long-range relevance as they generate ocean waves. Also rainfall and temperature influence seismic noise in various direct and indirect ways. The interaction of such meteorological and seismological phenomena is known since about 100 years; however there are still few systematic measurements. We initiated the METSEIS project to derive data-based, qualitative and quantitative relations between meteorological phenomena and ground motion. In a joint experiment of the Geophysical Institute and the Institute for Meteorology and Climate Research at KIT we measured basic data to tackle this problem. For the measurements stations were placed close to meteorological stations, mainly of the Germany’s National Meteorological Service (DWD). These temporary measurements were done between May 2008 and May 2009. We also use recordings from other KABBA experiments and from permanent stations which provide longer time series.