The seismicity and magmatic processes of the Eifel Volcanic Fields are long-time research interests of GPI since the 1970ies. Then seismic refraction and teleseismic studies were conducted by K.-P. Bonjer, S. Faber, K. Fuchs, J. Mechie, C. Prodehl, and S. Raikes. It was found out that seismic low-velocity anomalies may be related to partial melt in the upper mantle below the Eifel and that this melt may accumulate at the crust-mantle boundary as underplating. J. Ritter (then at Göttingen) conducted the Eifel Plume Project with 250 seismological in 1996-1997. The main outcome was a deep-reaching seismic low-velocity anomaly between ca. 45 km and 400 km depth which is interpreted as upper mantle plume. Since 2014 we run a seismic network around the Laacher See Volcano with 15 recording stations from GPI to monitor the local seismicity (DEEP-TEE experiment). Additional recording stations from the seismological services are included with Mainz (LGB) as main partner. One major outcome was the detection of deep low-frequency(DLF) events which outline a steep channel of volatiles and melts rising from the mantle to the upper crust. (https://www.3sat.de/wissen/nano/es-brodelt-weiter-100.html Deutsches Fernsehen).

In 2020 a seismological experiment was installed across the Ochtendung Fault Zone (OFZ). The OFZ is a continuously active fault which generates felt earthquakes about once per year (magnitude up to ~3.5) and weekly minor events (magnitude up to ~1). This seismicity makes it one of the most active faults in Germany. Although its seismicity can be well located (at about 3-15 km depth), there is no known surface trace. This OFZ experiment is a joint effort of GPI, RWTH Aachen, and Seismological Service Mainz and it will last for about six months. Besides recording (micro-) earthquakes from the OFZ, we also expect to catch deep low-frequency events which occur just south of the Laacher See Volcano. 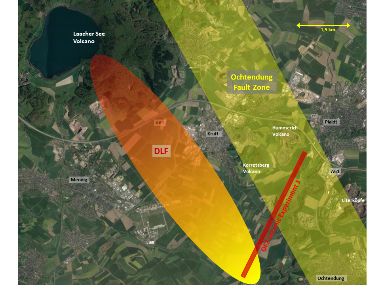 Fig. 2: Map of the region southeast of the Laacher See Volcano (LSV). The Ochtendung Fault Zone (OFZ) runs from NW (east of LSV) to SE (Mosel River), here we show in yellow the estimated projection to the Earth’s surface. The OFZ seismic experiment is plotted in red. To the west there is the zone with deep low-frequency events which may represent a channel of rising magmatic volatiles and even melt. Background from Google Maps.